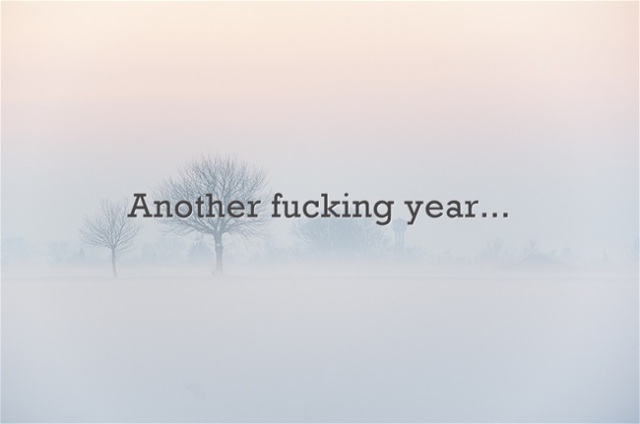 There is something about the holidays I find depressing. I know I’m not alone and many feel the same. It’s a stark reminder of yet another year passing. It’s cold, and I’m still alone, and after the year I’ve had, I know I’ll still be alone when the next season rolls around.

Last year, in this same house, I wrote a short story about finally being claimed by the man I’d loved. We’d had as intimate of a relationship as is possible, without ever touching. In our modern age of technology, carrying on an online-only relationship is truly possible. It’s about really good communication, and we had that in spades. Unfortunately, we didn’t have enough of everything else for me to continue waiting. Two years was long enough, and I craved real, and real intimacy.

So, last year I wrote that story as my fantasy that he’d finally show up, (we’d separated in 2015), and warm me from the inside, (That short erotic piece is on my website at http://www.paynehawthorne.com .”The Claiming”). It of course didn’t happen. That kind of shit never happens. Like I said, it was a fantasy, and I’m fully aware of the difference between my reality and the fiction I write about. I guess I’m thinking about it since I’m in the same house, and it’s bitterly cold, and I just built a fire in the wood stove. All little reminders of what I was feeling last year, when I was alone.

This season was supposed to be different. I was supposed to be with my new love. The one I met back in February. Although our affair was torrid, it was short lived; much too short for me, but he’s still young and where the cyber-boyfriend and I had excellent communication, me and young-new-BF, had none. The thing with him was he only lived a few hours from me and he was that real intimacy I’d been craving.

If only he’d had the communication skills the cyber-BF had, if only. This seems to be the story of my life. I find pieces and parts in different men, but none are the whole package. Along the way, I’d accumulated a few miles and years on my soul, and I’d been learning and acquiring the parts I needed to be a complete person.

The intimacy with new-BF was amazing. I’d gone seven years without being touched. I was ravenous. Actually, I still am. I’ve always had an immense sex drive, but I’ve never been privileged enough to dwell with someone who matched me. New-BF matched me in that department better than I could have ever imagined. I guess that longing I feel now is simply a chemical thing, something my body craves. Once again, denial certainly makes one want it more. I hate that paradox.

Not having a real home is another contributing factor in my depression. I have a place where my stuff lives, but I am rarely there. I miss my dog, and my cats, and my bed, but my house/pet sitting business is thriving, so I am never there. I feel like a gypsy, and often it takes me long minutes in the mornings to know where I am. It’s the opposite of grounding. I think it’s why I often feel like a satellite, orbiting around everyone else’s lives, only watching, only serving, never really there, never really belonging.

I thought having my own person, someone who loved me as much as I did them, would solve that problem. I guess I’ll never know. You see, the thing with new-BF is that it turns out he was my, ‘One,’ the soul mate I’d been waiting for. I can only contribute our demise to really bad timing. Timing is a bitch, and even though I thought he was mature enough to handle me, turns out I was once again, wrong. I’m wrong a lot. It gets tiring sometimes, although humbling.

So, as I sit here, wondering how I’ll make it through the night, and tomorrow. I’m missing him more than I could have ever imagined. I’m wishing I weren’t so sensitive and that his indifference and immaturity hadn’t wounded me to the point of me rejecting him. Wishing he hadn’t turned it all back on me so now I doubt my own sanity. Wishing I didn’t cry so easily. I never used to cry at all, and now? Now I cry daily. It’s driving me crazy to be this sensitive.

New-old-never-to-be-again-BF, is only five minutes away from where I sit in my puddle of tears. He’s visiting family this weekend. I can feel him. Oh yeah, I have that fucking, empathy gift, thanks mom, not really a gift. He’s right here, and yet a million years away. I can’t access him. I can’t touch him. I don’t get to have him in my life. Once again, I find my inner turmoil one of those fucking paradoxes I distain. Ain’t that life though? Nothing but one fucking contradiction after another.

So it’s another holiday season. Another cold winter. Another numb year for me. I can’t imagine anyone could steal my heart. I can’t imagine giving myself to anyone else, ever again. Next holidays I will be fifty. I think I must come to grips that this is it for me, and as much as my lifelong dream of finding my soul mate kept me going, I’m forced to find a new reason. One has yet to materialize, but I’ll slog through the tears and count another day down at the end of it.

EPILOGE: I sat down and started writing our story. It’s more of a memoir told from my point of view. It poured from me during this last week between the holiday weekends. It was, if nothing else, a great cleansing for my heart. I already had a raft of poems and prose I’d written during and after the affair, and those will be in the book, along with correspondence. Keep an eye out in early 2017 for my first non-fictional novel:

PEEING WTTH THE DOOR OPEN, Not a love story. A memoir by, Payne Hawthorne 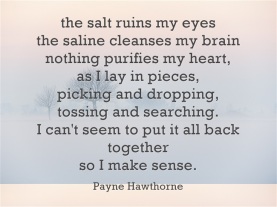 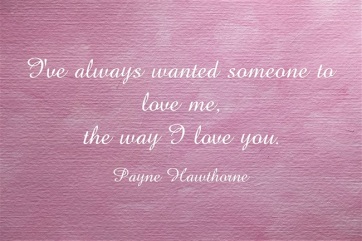 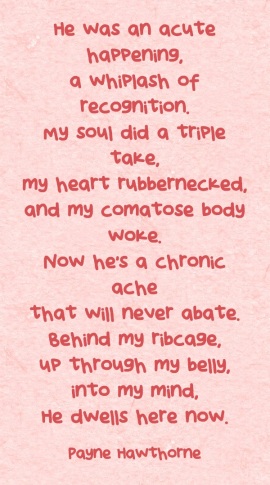 My strange life, my journey and life lessons. This blog feed is all non-fiction, real life, me, myself and I. This is where you will find the person I am aside from all my fictional books, stories and characters. This is Payne! https:www.paynehawthorne.com https://www.facebook.com/PayneHawthorneAuthor https://www.facebook.com/houesofpaynepublishing
View all posts by Payne Hawthorne AdventuresinPayne →
This entry was posted in Uncategorized. Bookmark the permalink.

1 Response to Another Fucking Year